Here at Ramp we’re starting to see more and more startups realize that free custom t-shirts incentivise customer loyalty. Somehow they get people using their product. Everyone loves t-shirts, and everyone loves free stuff. So this seems like a no-brainer, right? We wanted to get to the bottom of what was driving this, and if it was effective. 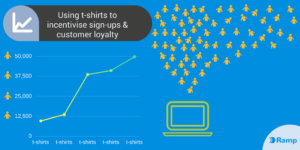 We spoke with Wil Benton, co-founder of one of our favourite new startups, Chew*, as well as Hugh Hopkins, Product Manager at realtime analytics company GoSquared.

So, first of all, why custom t-shirts incentivise customer loyalty?

They’re providing a live-streaming platform for DJs to share their shows and mixes, so t-shirts feels like a really good, ahem, fit for them. “At one point, we tried things like giving away a GoPro to a random user as an incentive to get DJs broadcasting on Chew, but it didn’t work as we intended. The winners of the GoPros never really came back to the site once they’d won them, which defeated the point of the mechanic. T-shirts are relatively cheap to produce, everyone loves them, and people wear them for ages afterwards, effectively acting as free marketing for us (even if they don’t come back to the site too often)”.

As with all customer acquisition processes, it’s obviously important to know exactly what you’re incentivising, and therefore measuring. For most startups it will probably be either signups, or engagement. In other words, were Chew interested in just getting their email addresses, or were there specific actions that they wanted these users to undertake first?

“For us, it stemmed from looking at what Twitter were doing. They’d identified that people only truly become active Twitter users once they follow at least a certain number of accounts. So they give you a list of accounts they recommend you should follow when you first get started as a new user on the platform.” said Benton.

“We looked at the bare minimums a user needed to be doing to become engaged with the Chew community. For us, that was streaming a certain number of shows, following other accounts, engaging with other users in the chat etc. Once a new user had completed those actions, we knew we’d done all we could to get them engaged with Chew”.

So, it’s engagement for you, rather than just sign-ups, then? Did it work?

Speaking to Hopkins at GoSquared, the story was similar.

“We’ve probably given out over 400 t-shirts. We’ve experimented with different brands and qualities and have settled on a high quality t-shirt that fits well and is comfortable to wear. Our current strategy of automatically offering them to highly engaged customers is proving really effective”.

And what were the difficulties? Any downsides?

Wil at Chew: “Distribution was time-consuming — bagging and queueing at the Post Office! Shipping to weird and wonderful places around the world often cost more than the shirts themselves. Otherwise, it’s a really cost effective way to get access to our users. A bonus is that we get their mailing addresses, too. We can follow up with goodies and thank yous with that data further down line. And it’s always useful to know where in the world your users are”.

For Hugh it was a simpler pain point: “Finding a decent supplier!”. But he also echoed the distribution costs met by Chew:“As a startup t-shirts can be an expensive form of promotion, you have to include posting and time as well”.

So, what would you do differently?

GoSquared’s Hopkins “[Next time we’d be] clearer on a strategy. When t-shirts are made cheaply it can be a completely ineffective form of promotion as no one wants to wear them. So just focus on t-shirts that people will wear and promotes the brand.”

Wil at Chew: “Some people were just doing the bare minimum to qualify, as quickly as possible, and then never came back. Next time we’ll require them to go through the processes over a set period of time (rather than in one go) to encourage long-term engagement, rather than being able to just do it all very quickly. But, everyone who received a package loved the tshirt/ stickers/ note — one guy even stuck the Chew logo on his car!”

So, do t-shirts make sense to give away in order to encourage engagement. It seems like a resounding “Yes”. Who knows, if you get your marketing strategy right, you may even end up with people branding their cars for you.

If you do decide to give away free t-shirts, here’s your tick-list to make sure you do it right.

Like this? See how Hotjar used t-shirts to drive thousands of sign-ups, and how Keen.io hid free t-shirts in their code to encourage developers to use their API.

* Full disclosure — We were introduced to Chew recently, as they have also been through the Ignite programme, and we made a contribution to their crowdfunding campaign.